Valium is produced by Martin Dow, it contains diazepam. It is a member of the benzodiazepine tranquilizers group. It is an anxiolytic, sedative, and muscle-relaxant agent, which reduces pain and anxiety within few minutes. It directly affects neurotransmitters of the brain.

It is also being used or known as Valium for Sleep or sleep disorder.

Valium composition contains 2mg, 5mg, 10mg and in injection form. After oral administration, it rapidly absorbed in the stomach, and plasma concentration appearing from 20-60minutes. Valium injection is also being used in severe cases to reduce tension and pain immediately.

To relieve tension and anxiety

To treat insomnia and sleep disorder

The dosage should be carefully individualized. Secondly, it also depends upon the severity of symptoms and the patient’s condition. The single dosage of diazepam should not be exceeding than 10mg and not more than 30mg within 24 hours.

Note: Do not give Valium for more than 6 months to a patient.

Elderly: 5-20mg every 24 hours or depending upon the severity of symptoms.

Side Effects of Valium (Diazepam)

Common: The most side effects of Valium include, dizziness, blurred vision, drowsiness, and fatigue, and muscle weakness.

Diazepam is contraindicated in patients with

Patients who are hypersensitive to benzodiazepines

While treating a patient, you should be aware of his/her history. He or she has no history of alcohol or drug abuse. Secondly, a lower dose is recommended for patients with chronic respiratory insufficiency.

Do not use Valium in pregnancy and Lactation.

Overdosage in a patient leads to depression ranging from drowsiness to coma and it also hit the central nervous system. Overdose may cause drowsiness, confusion, inappropriate behavior and it also leads to coma.

Treatment: Vomiting should be induced. Secondly, if you do not find any advantage in emptying the stomach, activated charcoal should be given to reduce absorption. Flumazenil is also useful as an antagonist. 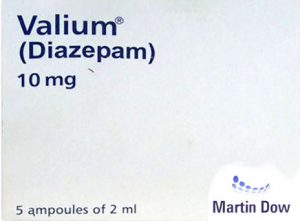