URIXIN 400mg tablet is produced by Abbott, which contains Pipemidic Acid. It is an antibacterial agent useful in the treatment of urinary tract infection (UTI). It is effective against some strains of staphylococcus but is markedly effective against gram-negative organisms including pseudomonas aeruginosa as well as some gram-positive bacteria (in vitro). Urixin 400mg tablet is being used for the symptomatic relief of painful urination, dark urine, burning while peeing, pain on abdominal sides, urine leaking, urinary frequency, etc.

URIXIN is not recommended for use in patients with severe renal failure.

The occurrence of neonatal hemolysis is possible during the administration of pipemidic acid in late pregnancy in patients with a congenital deficiency of glucode-6-phosphate dehydrogenase (G6PD. Joint damage has been described in children treated with quinolones but to date arthropathy secondary to exposure in utero is not reported.

Urixin was found in maternal milk. As a precautionary measure, the administration of this drug is contraindicated during breastfeeding. 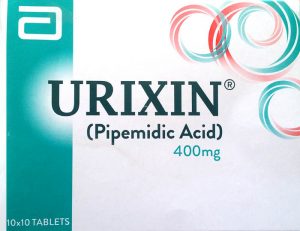