Transamin is produced by Hilton under the license of Daiichi Sanyo Co. LTD Japan. It is an antifibrinolytical agent, which revere the effects of fibrinolytic and streptokinase activities. Tranexamic acid is being used to control bleeding and subarachnoid haemorrhage. It only reduces bleeding; therefore do not use it to control menses. You can use it only if you have excessive bleeding during the menstrual period. It is also being used to control bleeding in trauma, surgery, tooth removal, upper respiratory tract disease, acute spasm and strains, haemophilia, nosebleeds, GI haemorrhage and also being used to treat internal bleeding.

Transamin is being used to control any kind of bleeding like nasal, pulmonary, renal haemorrhages, prostate surgery, etc

Transamin is being used to control swelling and itching in eczema, drug rashes, urticaria, and toxic exanthema, etc

Transamin is being to treat mucosal aphtha in cases of stomatitis

Transamin is being used in post-partum hemorrhage

Hypersensitivity: Do not use tranexamic acid if you’re hypersensitive to it.

Effects on dermatology: In some cases, patients feel itching, exanthema, and skin rashes may occur.

Other side effects: After using Tranexamic Acid, you may feel drowsiness and fatigue. Secondly, in dogs, it has been observed that retinal changes may occur over a long period of administration.

Tranexamic Acid is contraindicated in condition like defective color vision

Tranexamic Acid is contraindicated with patients having intravascular clothing

There has been researched done on mice. It shows some statistics about Tranexamic Acid. Tranexamic Acid has been administered to rats for 6 months continuously. In this research, few things were examined such as general condition, organs, and blood. The finding shows that there are no abnormalities were seen up to a dose of 1.5/kg but on the other side, a higher dose of 3g/kg or higher has caused diarrhea.

Research has suggested that pregnant mothers do not use Tranexamic Acid during pregnancy. Consult your gynecologist before taking any medicine in pregnancy.

Lactation: In that research when 40mg/kg Tranexamic Acid was administered to rats. The concentration of 6.1ug/ml after one hour has been seen in mother milk. Therefore do not give Tranexamic Acid to lactation mothers. 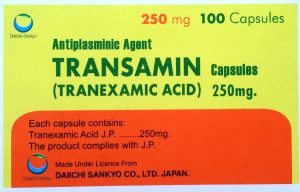 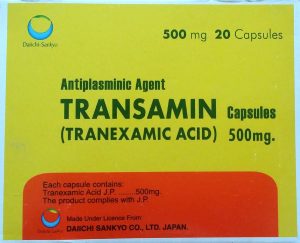 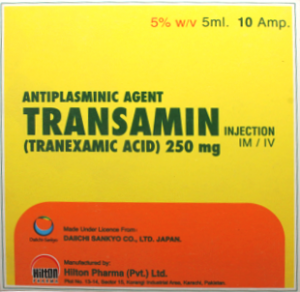 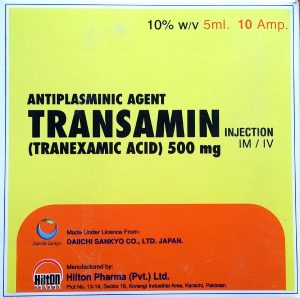