Prothiaden is produced by Abbot, it contains Dosulepin Hydrochloride. It is being used for the indication and treatment of depressive illness, anxiety, tension, and migraine headache, etc. Dosulepin is only being used in patients intolerant to other anxiety medicines such as bromazepam and alprazolam. Prothiaden contains anxiolytic properties. It is antidepressant and anxiolytic medicine; therefore it should be consumed on advice.

Blood and lymphatic system disorder: It can cause bone marrow depression and agranulocytosis.

Immune system disorder: Dosulepin hydrochloride can affect the immune system as well, it can cause hypersensitivity reactions

Cardiac and vascular disorders: Hypotension and cardiac arrhythmias are likely to occur with high dosage.

Death may occur from overdosing on Dosulepin Hydrochloride. Therefore do not use Prothiaden with alcohol. Toxicity may occur within 4-5 hours after oral administration.

It is also contraindicated for the treatment of mania

Dosulepin is contraindicated for patients with severe liver disease

And also those patients who are hypersensitive to Dosulepin Hydrochloride 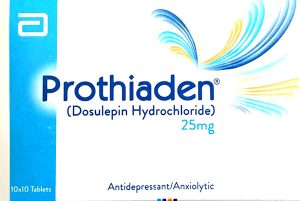