Fexet tablets are produced by Getz. Fexet contains Fexofenadine while Fexet-D contains Fexofenadine + Pseudoephedrine. It is being used for the indication and treatment of seasonal allergic rhinitis, fever, sneezing, and runny nose and for nasal congestion. It is also being used for the treatment of uncomplicated skin manifestation of chronic idiopathic urticaria in adults and children 6 years of age and older. It significantly reduces pruritis and the number of wheels. Fexet is the best anti-allergic and nasal decongestant medicine in Pakistan. This series contains Fexet 60mg, Fexet 120mg, Fexet 180mg, and Fexet-D tablets.

It is an antihistaminic and anti-inflammatory agent, which is being used to reduce allergic reactions such as watery eyes, itching, sneezing, common cold, runny nose, flu, and red eyes, etc.

Fexofenadin HCL is generally well tolerated. However following are a few of the side effects that are known to be associated with the use of Fexet, such as headache, drowsiness, nausea, vomiting, blood dyscrasias, hair loss, fatigue, and dizziness. In overdose, it can cause convulsions, ataxia, coma, sedation, cardiovascular collapse, etc.

Fexofenadine is contraindicated in patients with known hypersensitivity to the drug. Do not give Fexet or Fexet-D to cardiac, kidney dysfunction, neonates, and geriatrics. Consult your physician before taking any medicine.

Do not give Fexet to pregnant and lactation mothers. Consult your physician before taking Fexofenadine + Pseudoephedrine. 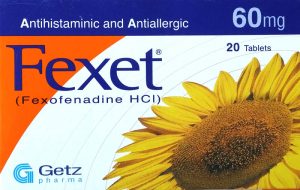 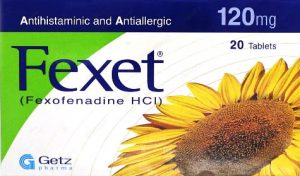 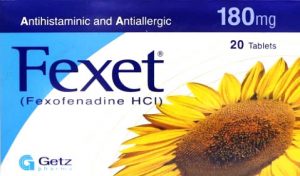 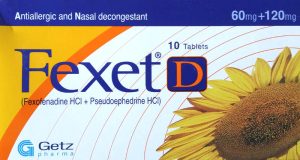