Actifed P: Actifed is produced by GSK, which contains Triprolidine + Pseudoephedrine + Paracetamol. It is being used for the indication and symptoms of upper respiratory tract congestion, such as influenza, common cold, nasopharyngitis, cough, allergy, and sinusitis, etc. It relief from associated

If you or your child is facing fever, runny nose, cough, and cold, all you need to take Actifed-P as a remedy. Actifed-P Cold tablets are for adults while Actifed-P Cold Syrup and Actifed-DM syrup are for the kids.

Triprolidine: It is an antihistamine agent, which is being used for the indication and treatment of seasonal allergies, such as rhinitis, common cold, angioedema, fever, and urticaria, etc.

Dextromethorphan: It is more or less tolerable but when the symptoms become severe it causes excitation, dizziness, vomiting, mental confusion, and restlessness, etc.

Drowsiness and central nervous system depression may occur. Therefore, do not operate any machinery.

Actifed should not be used with alcohol. Secondly, the patient’s blood pressure should be absorbed before giving Actifed.

Caution should be exercised before taking Actifed-p. Pseudoephedrine, triprolidine, and paracetamol are excreted in breast milk in small amounts, but the significance of the effect of this on breast-fed infants is not known. Before taking this medicine consult your doctor if you are pregnant or breastfeeding women. 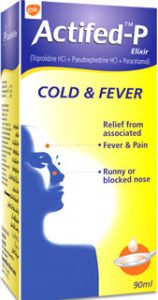 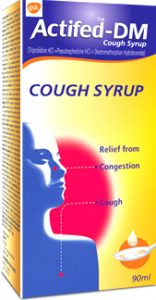